You registered for the Belgian Jazz Meeting, but you don’t know where it is and how to get there? Here you find all the information you need.

How to get to Ghent

Ghent is centrally located in Europe, at the crossroads of highways between Amsterdam, Paris, London and the Ruhr area. The city is easily accessible by car, by train and by air.

By car
Ghent is situated at the intersection of two major European highways: the E17 connects Northern Europe with the Southern countries, and the E40 goes from the North Sea up to Eastern Europe.

By train
Ghent is easily accessible from all Belgian and European cities and only half an hour away from Brussels Midi/South Station. Thanks to the high speed trains, Eurostar and Thalys, Ghent is only two hours away from Paris and less than three hours from London, Amsterdam and Cologne. The main station in Ghent is Gent-Sint-Pieters.

By air
Ghent is only 45 minutes away from Brussels National Airport, and there is a train station at the -1 level of the airport. There is a direct train from the airport to Ghent Sint Pieters (the main station in Ghent), but it’s quicker to get a train to Brussels (North, Central or South) and transfer to Ghent there. You can buy a train ticket beforehand via the website, but you don’t need to, as these trains have free seating.

The other Belgian Airports (Ostend, Antwerp, Liège and Charleroi-
Brussels South) have easy and direct connections to Ghent as well. From Charleroi, you can take a direct bus (book in advance though).

Handelsbeurs Concertzaal (Kouter 29)
This is where most of the meeting takes place. On Friday 5 April, we are here all the time, for drinks, dinner and concerts. On Saturday, we start here for the panel and lunch, and then explore the city. Around 17h we meet again at Handelsbeurs for the info market, more food and more concerts.

Bijloke Music Center (Bijlokekaai 7)
During the walk through Ghent on Saturday afternoon, we stop off for a great showcase here.

Krook (Miriam Makebaplein 1)
After Bijloke, this is our next stop for a showcase ‘on location’. It is the brand new city library.

Are you an international guest? Then your lodgings for the weekend are at the Ibis Opera (Nederkouter 24). This hotel is 2 minutes walking from the main venue Handelsbeurs. To get there, just follow the directions above to the venue and have a stroll to your hotel.

So you can continue your jazz night after the official selection of BJM concerts are finished! 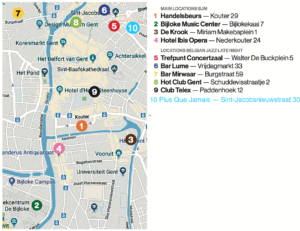